Schumacher being brought out of coma

Schumacher being brought out of coma 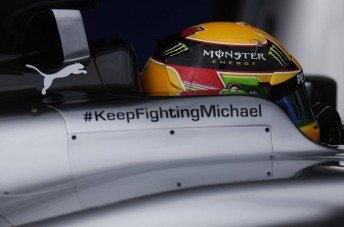 More than a month after suffering massive head injuries, Michael Schumacher’s management has confirmed that he is being carefully brought out of an artificial coma.

A brief statement released on behalf of the seven-times F1 world champion said that doctors at the Grenoble University Hospital in France have started reducing the sedation.

However it warned that the process could be lengthy.

“Michael’s sedation is being reduced in order to allow the start of the waking up process which may take a long time,” the statement read.

“For the protection of the family, it was originally agreed by the interested parties to communicate this information only once this process was consolidated.”

Schumacher’s family have re-affirmed their need for privacy but have acknowledged the global outpouring of sympathy and support for the world’s greatest grand prix driver.

“The family of Michael Schumacher is again requesting to respect its privacy and the medical secrets, and to not disturb the doctors treating Michael in their work.

“At the same time, the family wishes to express sincere appreciation for the worldwide sympathy.”

Schumacher hit has head on a rock while skiing off piste on a slope at the Meribel resort in France where he owns a chalet on December 29.

Surgeons have performed two brain operations on Schumacher, the second occurring on December 30.

The latest statement by his management is the first official communique since January 17.

Formula 1 teams Ferrari and Mercedes have run tributes for Schumacher as the 2014-spec machines took to pre-season testing for the first time at the Jerez circuit in Spain this week.