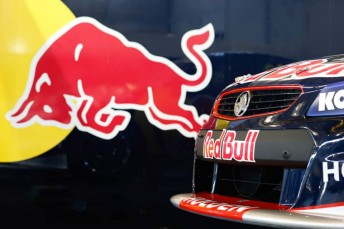 The debut of the Car of the Future technical regulations ensured a mixed bag of results in 2013, with a record 17 different drivers from eight different teams winning races.

Despite the shake-up, Red Bull and Ford Performance Racing ended up locking out the top four spots in the championship for the second consecutive year.

BJR started off the season with two of the quickest cars and, after a mid-season lull, rallied to score sixth and seventh overall with Fabian Coulthard and Jason Bright respectively.

“Last year, everyone was new to their cars and there was lots to be learned,” he told the Red Bull website.

“But this year there won’t be as many mistakes by the more successful and therefore less opportunities.

“And I think the most successful teams off the back of where they finished last year and their understandings of the car will be Brad Jones Racing, FPR and us.

“I think between those nine cars they will make up 90 percent of the race wins this year (up from 72 percent in 2013).

“And obviously Red Bull is in a very good position. I think the championship is in good hands.”

Red Bull was not immune from fluctuating form last year, with eventual champion Jamie Whincup failing to qualify in the top 10 on six occasions.

With no previous data using the independent-rear-end cars on all but their test circuit, finding the right set-up was a far harder task last year than what Lacroix is expecting for 2014.

“We have a better understanding of the tyres and how the car acts and reacts to certain set-ups, so now it’s a matter of fine-tuning things,” he continued.

“Of course, there will be new components but overall it will be lots of little improvements that make a difference.

“There are a lot of things we can do better this year and it’s helped very much that we haven’t had to spend the entire summer designing and building a car but improving them a year on with what we now know.”

Whincup is shooting for a record sixth championship title this year and will do so with a revised engineering structure around him.