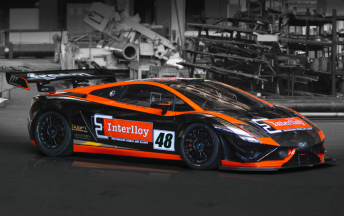 Steven Richards will dovetail a co-driver role in the Australian GT Championship with his Pirtek Enduro Cup V8 Supercars and Carrera Cup commitments this season.

The 41-year-old will co-drive Melbourne-based businessman Justin McMillan’s striking new M Motorsport Lamborghini Gallardo, which arrived in Australia earlier this month, in the bulk of the six-round series.

The pair will be joined in the car by Dale Wood and Ross Lilley for next month’s Bathurst 12 Hour prior to the AGTC campaign.

McMillan, Richards and Lilley teamed up to finish 13th in last year’s race after losing several laps early with a gearbox problem.

Richards believes that the new car and revised FIA Balance of Performance will both play into the team’s hands this year.

“This is a young team experience-wise, but there are some wise heads amongst the team that understand that this is a 12 hour race around one of the toughest circuits in the world,” he said.

“I think we’re a top five car certainly, but beyond that, there are a number of factors that will come into play. 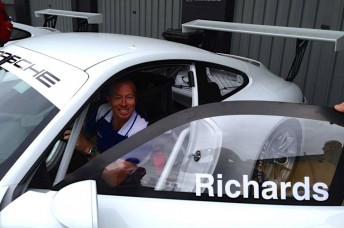 Richards will run his Carrera Cup program from McMillan’s workshop

“The FIA have been kind to the Lamborghini since last years 12 Hour and we have a different restrictor.

“Last year it seemed to me to be more of a ‘point and squirt’ kind of car, but after our test at Phillip Island you could feel the improvement mid-corner and out of the corners.

“It’s an incredibly well balanced car, it’s brakes are fantastic and fitted with the Pirelli tyres which proved incredibly durable last year, it will be an excellent combination.”

“Justin has an impressive infrastructure down there,” said Richards.

“I have my own Carrera Cup car to run this year, and a number of customer cars, while Justin has his own cars as well as a fleet of classic and sports cars that his team maintain and prepare from Port Melbourne.

“I’m looking forward to the move because it gives me the space and access to broaden my business, and also assist M Motorsport with their growth.”

Richards shocked the V8 Supercars paddock in December by switching from Ford Performance Racing to Red Bull Racing Australia for the 2014 endurance events.