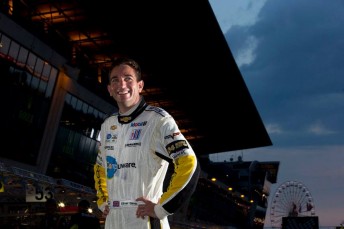 United SportsCar Championship star Oliver Gavin says he’s not underestimating the challenge of Mount Panorama ahead of his debut in the Bathurst 12 Hour.

The American-owned team has struck a deal with local outfit Peter Conroy Motorsport to utilise the team’s car.

The 2011-specification R8, which will run in Class B, finished eighth last year with Huff, Conroy and Briton James Winslow aboard.

Gavin is a four-time American Le Mans Series and Le Mans 24 Hours class winner, but says he’ll have plenty of respect for Bathurst when cutting his first laps on Friday, February 7.

“This will be my very first time at Mount Panorama and it’s very exciting to have the opportunity to compete in the Bathurst 12 Hours with Rotek Racing,” said Gavin, who has been a factory Corvette driver for 13 years. The Conroy Audi will be utilised by Rotek this year

“It’s a race that’s growing in stature and it’s certainly going to be a challenge.

“Any Australia motorsport aficionado will say that Bathurst is very unique and a circuit that cannot be replicated, in the same way as Le Mans, Macau, the Nurburgring and Spa.

“I think you need to spend quite a lot of time there to get somewhere close to being competitive and getting used to the circuit’s high-speed sections and the closeness of the walls is going to be one of the biggest challenges for me.

“However, we have a solid driver line-up and the plan is to push for the class victory.

“We will have a good, fast and solid package that’s capable of fighting with anybody.”

Huff meanwhile is returning for his second Bathurst visit and does so following a victory in the club-level 25 Hours of Thunderhill race in California, USA, with Rotek in December.

“It’s exciting to be linking up with Rotek Racing once again, following the NASA 25 Hours of Thunderhill success in December,” said Huff, who this season joins Lada’s factory WTCC program after a single season in a privateer Seat.

“I’m familiar with the Audi R8 LMS after racing one at Bathurst in 2013 and the team’s driver line-up is strong, so I’m naturally hoping to replicate the Thunderhill result.

“I seem to be on a bit of a roll in endurance racing, so let’s hope this winning streak continues in Australia!”

The Rotek Audi is one of is one of 13 Class B entries for the race, with the division also including the Dean Koutsoumidis Audi, Eric Bana-driven Racing Incident Lamborghini and a fleet of 11 Porsches.