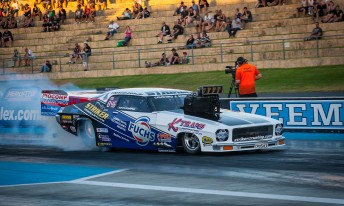 Record fields for Western Australia will line-up for the opening rounds of the ANDRA Top Doorslammer and Top Alcohol Championships at the Perth Motorplex this weekend.

19 Doorslammers and 12 Alcohol machines will try to squeeze into just eight race day positions per category. Defending Champion and Perth local, John Zappia has been getting in as much testing during Motorplex meetings this summer as possible.

Zappia is aiming to get his campaign for an unprecedented seventh consecutive Championship underway in the best shape possible in front of the big home crowd.

He is wary that any one of the 18 other supercharged V8s on hand can throw out the challenge. The veteran fears main rival over recent times, Peter Kapiris, but says the Striker Crushing and Machining/Fuchs Monaro team will be concentrating on their own performance.

“Peter Kapiris is still going to be a threat but any of the others can stand up at any time,” said Zappia. “They are all capable of running the numbers; it’s only whether they stumble on their consistency.

“You just can’t discount anybody. We’ve got to worry about ourselves and get the car going strong.”

Recent changes to some of the combinations see automatic transmission technology coming into the category, Zappia warns that some competitors are getting a handle on that and running some super quick times – and crucial advantages on the holeshot.

“Some teams are going to automatic transmissions, if that works, it gives them a reaction time advantage. Stuart Bishop has got one and he’s running 5.80s and low 5.90s.

“If they can get that working right they’ve got the reaction advantage. They’re only dropping a button instead of a clutch.”

Heading to the Motorplex, the iconic Victor Bray will be hoping for similar fortune to that he tasted last year at the venue – taking his first ANDRA event win in some years and setting his first ever pass in the five second bracket.

A number of other leading drivers from WA have been using the track time offered by regular meetings at the Motorplex to work on their combinations and the likes of Daniel Gregorini, Marty Dack, Murray O’Connor and Pat Carbone can be expected to give the Eastern staters a run for their money.

John Cannuli and Grant O’Rourke will be looking to edge their way into the tiny field as will popular Sydney-sider Maurice Fabietti.

On the Top Alcohol side, Cannuli will be doing double duty, however all eyes will be on multiple Australian Champion, Gary Phillips. He will be aiming for his account to be opened in the best possible fashion in Perth, similarly his fellow Queenslander, Steven Reed.

Rob Pilkington and Adam Marchant have been busy testing at the ‘Plex during the summer, whilst PIRTEK Blackwater backed youngster Shane Weston is aiming to get his Top Alcohol Championship class debut underway with a degree of strength:

“Last time out (at the Motorplex) we ran our quickest and fastest time of 5.61 seconds at 403kph (250.69mph),” said Weston. “The previous run was 5.69 seconds, which shows we are heading in the right direction and with these times we should be able to qualify (in the eight car field).”

If the track the Perth Motorplex turned out for the opening round of the Australian Top Fuel Championship earlier this month, the two categories should be able to produce some extremely quick and close times.

Action gets underway with qualifying on Friday night with eliminations on Saturday.