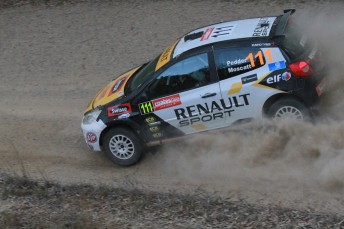 Walkinshaw Performance has taken the plunge into gravel rallying by forming an alliance with Scott Pedder’s Renault Sport team.

The Melbourne-based Walkinshaw Performance, part of the wider family which is behind the Holden Racing Team V8 Supercars squad, will supply mechanical, engineering and logistical support at the six rounds of the East Coast Bullbars Australian Rally Championship.

The company will also take up responsibility of the research and development of the Renault Clio rally car as it searches for a breakthrough win in the ARC.

The deal is a continuation of Walkinshaw’s association with Renault, having looked after the French marque’s tarmac rallying activities last year.

Prior to the link with Renault, the company’s activities in Australia had been solely focussed on General Motors products.

“This is a terrific step for WP and the wider Walkinshaw Group,” he said.

“As we seek to further diversify our interests, an opportunity to work with a proven performer in Scott Pedder and (co driver) Dale Moscatt is ideal.

“In 2013 we competed at Targa Tasmania for Renault Sport and took the win with Grant Denyer and Dale Moscatt.

“In 2014, we will seek to deliver Scott Pedder an ECB ARC championship. We think our racing pedigree and engineering excellence will be a decisive factor as the season progresses.

“We are not in the ECB ARC to ‘check it out’ and then have a go in 2015; we are going to hit the ECB ARC at full speed in 2014 and we believe we have the crew, car and team to achieve championship success.”

Pedder’s G2-spec Renault Clio will be based out of the Clayton premises which houses the Holden Racing Team and Holden Special Vehicles.

Next Story Toyota rules out WRC return in 2015