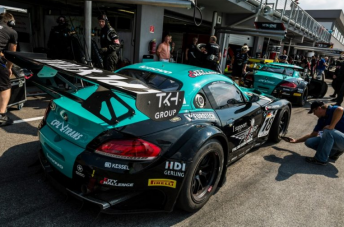 The Vita4One BMWs will not be seen at Bathurst

The German squad had entered two BMW Z4s in what was touted as a major coup for the event.

Owner Michael Bartels has subsequently withdrawn both entries after failing to come up with the budget to fund the trip.

The team had entered Yelmer Buurmann, Jens Klingmann and Niki Mayr-Melnhof in its lead car while looking for funded drivers for the second entry.

The field is now down to 44 cars; six less than what had appeared on the entry list issued by race organisers last week.

Trofeo Motorsports has elected not to campaign its Corvette Z06R, which was to be shared by Jim Manolios, Ivan Capelli and Greg Murphy.

Murphy will instead race at Manfield, New Zealand, on the same weekend in the V8 SuperTourer Series.

The top of this year’s entry, however, remains heavily stacked with big name international drivers.

The confirmation of Rotek Racing’s line-up has added two more stars to the event, with factory Corvette Racing driver Oliver Gavin now set to enjoy his first taste of the Mountain aboard the team’s Class B Audi R8.

Gavin is a four-time American Le Mans Series champion and four-time Le Mans 24 Hour class winner with the Corvette outfit, and has previously raced in Australia as part of V8 Supercars’ Gold Coast 600.