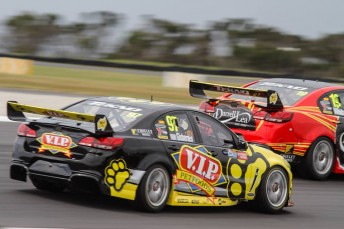 A two-car presence remains a possibility for Tekno Autosports this season despite little over two weeks now remaining until Sydney’s pre-season test.

The team has been expected to scale back to a single car for Shane van Gisbergen following the sale of the second license that it had previously leased from Paul Morris.

Talks with Tony D’Alberto Racing to run a second car under its license are continuing, however, with both parties keen to strike a deal.

The outcome of the talks will determine whether the field sits at 25 or 26 cars.

The financial pressures of racing in the category have already seen Triple F Racing (Dean Fiore) and Lucas Dumbrell Motorsport hand licenses back to V8 Supercars.

The yet-to-be-confirmed seats at Brad Jones Racing and in the remaining LDM Holden are meanwhile expected to be filled by Dale Wood and Russell Ingall respectively, completing the 2014 grid.

Tekno owner Jonathon Webb told Speedcafe.com that fielding a second car is still a possibility but that time is running out.

“I think we’d need to have it locked away before the 15th (February 15 test day) and know whether we are going to have a second one at the test,” he told Speedcafe.com.

“At the moment we’re putting 110 percent into Shane’s car and making sure that’s where it needs to be.

“What happens in and around that, we’re not too anxious about it. We’ll just see how it plays out.

“Both cars were very well maintained throughout the year so my car (from last year) is well up to scratch to go to the test day and Clipsal if required,” he added.

“We’ve dropped about four or five staff members, so we’ve geared back to go to one car, but in saying that finding a couple more staff wouldn’t be a problem.

“There’s still something in play there but we’re not jumping into anything too quickly.”

Webb is confident that his team can be a championship contending force this season following Van Gisbergen’s run to fifth in points last year.

The Kiwi’s first year with the team yielded wins at the season opening Clipsal 500 and the final race at Sydney Olympic Park.

Although yet to be confirmed, it is expected that the squad will be led this year by former Walkinshaw Racing managing director Steve Hallam.

The arrival of Hallam, whose resume includes stints with McLaren in Formula 1 and Michael Waltrip Racing in the NASCAR Sprint Cup, will be a major boost for the team following the management issues that hit its campaign in 2013.

As previously reported, Webb is himself expected to join Smith at the Holden Racing Team for the Pirtek Enduro Cup, linking with Garth Tander.

Tander is without his regular partner Nick Percat following the South Australian’s graduation to a full-time drive with the Walkinshaw team.

Although remaining cagey on his endurance plans, Webb says he expects to do minimal racing in the lead-up to the Sandown 500.

“I tossed and turned with doing a few other things, running a (Porsche Carrera) Cup Car or something like that, but I thought that I’m going to have enough to do anyway with the business,” he said.

“I also wanted to see how burning the desire was to get back in a race car. Until you don’t do it (for a period of time) you don’t really know.”

Webb’s off-track workload at Tekno has increased this year with wife Kobe stepping back from CEO duties ahead of the birth of the couple’s first child in March.