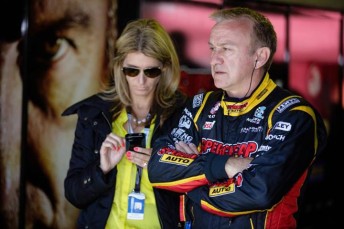 Russell Ingall is set to return for a 19th season

Russell Ingall is set to confirm his return to the V8 Supercars Championship for a 19th consecutive season.

Although 2013 was billed by Supercheap Auto Racing as Ingall’s final year, the former series champion has openly stated that he’d continue if the right opportunity presented itself.

Ingall’s drive in a single-car Lucas Dumbrell Motorsport effort is understood to have been brokered by Holden Motorsport.

Ingall had been known to have been in talks with LDM, which runs customer Triple Eight equipment, since last year’s Sydney season finale.

Although the team could not be contacted by Speedcafe.com this week, a V8 Supercars social media post has today confirmed that an announcement is imminent.

LDM has competed in the V8 Supercars Championship since 2010, initially running with Walkinshaw equipment before linking with Triple Eight two years ago.

The team has struggled to post competitive results throughout its existence, with drivers Dean Fiore and Scott Pye finishing just 24th and 27th in points respectively last year.

Others to have driven for LDM include Daniel Gaunt, Cameron McConville, Warren Luff and Taz Douglas.

Confirmation of Ingall’s deal will follow that of Dale Wood at Brad Jones Racing this morning, leaving the potential Tekno Autosport-Tony D’Alberto Racing alliance as the only unknown ahead of February 15’s pre-season test.

Next Story Erebus knuckles down on V8 development