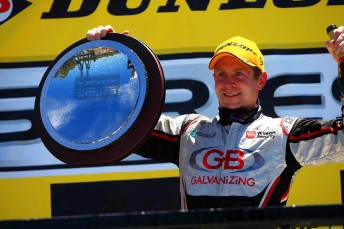 The 30-year-old steps into the car previously steered by David Wall, who has switched to Dick Johnson Racing.

Wood’s own backers GB Galvanizing and Strategy One will also have a presence on the car.

“This is an amazing opportunity, it’s a quality car and a quality team and I will have the chance to not only race against the best new talent from the development series but also against some of the most successful experienced drivers as well,” said Wood of the BJR seat.

“I want to thank my group of sponsors that have made this possible and Brad and Kim (Jones) as well.

“I know many other drivers wanted and also deserved this opportunity and to actually see it all finally come together for me is awesome.

“Gian and Vince from GB helped put the plan in motion for last year and Matty White gave me the car capable of winning the 2013 Dunlop series championship which in turn lead to this opportunity.”

The Victorian already has experience as a primary driver in the championship, completing the first 10 races of the 2009 season with Kelly Racing.

His best results of ninth came in the 2011 Bathurst 1000 while driving alongside Tony D’Alberto and the 2013 Gold Coast 600 alongside Chaz Mostert.

D’Alberto had been Wood’s competition for the BJR seat in recent weeks, but is now focussed on the possibility of inking a deal with Tekno Autosports.

Wood’s car will be run alongside those of regular BJR duo Fabian Coulthard and Jason Bright, both of whom won races last season.