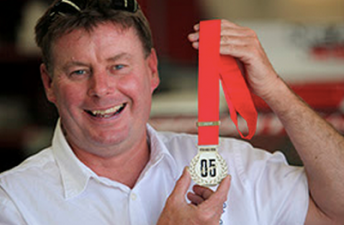 The Canberra-based Bates becomes the only person to be presented with both the Brock medal and the Phil Irving Award for engineering excellence.

A Toyota stalwart through a highly decorated career, Bates has claimed the Australian Rally Championship four times and was involved in one of the golden eras of the sport at the same time as the late Subaru champion Possum Bourne.

“I was overwhelmed when I received the Irving Award in 2007,” Bates said.

“The Brock Medal was totally unexpected and incredibly humbling.”

Bates, 48, won the Irving Award for the work of his Toyota team in designing and building a series of Corolla rally cars.

Bates and co-driver Coral Taylor won an Australian title in one of the Corollas while Simon and Sue Evans claimed two national titles in the Toyota.

The rallying ace is the third winner of the award which was previously won by the late Jason Richards and last year by V8 Supercar Craig Lowndes.

Bates and Taylor have been instrumental in driver education programs and have guided among others, Taylor’s daughter Molly who became the inaugural European Ladies Rally Champion last year.

“The key is helping people to understand the sport and keeping them in it,” Bates said.

“It’s important to be able to pass on the knowledge.”

Bates has now switched his focus on ‘classic rallying’, twice winning the Australian Classic Challenge division of the Australian Rally Championship for cars built before 1983 in his Toyota Celica RA40.

CAMS inaugurated the Brock Medal in 2011 and the Irving Award in 1994 to honour the two great contributors to Australian motor sport.

Irving was renowned for his work designing the Repco engine which took Sir Jack Brabham to his third F1 world F1 title in 1966 and was also responsible for some fine design work on motorcycle engines.

“I came into motor sport because I enjoyed it, and I’ve re-entered it in this next phase because the love is still there,” he said.