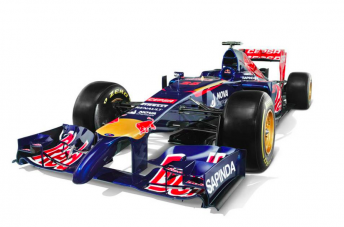 The build-up to Tuesday’s first pre-season Formula 1 test in Jerez, Spain, has continued with Toro Rosso taking the wraps off its 2014 contender.

The team unveiled its new car, the STR9, at the circuit ahead of a flurry of similar reveals slated for tomorrow morning.

The Toro Rosso features yet another different interpretation of the new nose regulations.

Team principal Franz Tost noted that his crew had “never worked as hard” as they had to in order to get the car ready for its initial shakedown at Misano, Italy, last week.

“In 2012, we began a concept study for STR9, the earliest we have ever started a new car project,” said Tost.

“As time went by, more and more of our staff were involved in the project, as we invested a lot of effort and resources, both technical and financial into the design of the new car.

“In 2014 the key parameters for success will be finding the best balance between deploying the power of the engine and managing the 100kg fuel limit per race, the use of the two energy recovery systems and, just as in the past, the tyres.”

Key changes at the squad for the new season include 19-year-old Russian Daniil Kvyat replacing the Red Bull-bound Daniel Ricciardo alongside Jean-Eric Vergne in the driving line-up.