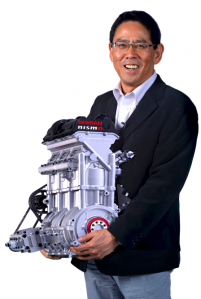 The Japanese manufacturer has released information on the engine following its first run in the car at a test last week.

The Zeod concept will see the petrol engine propel the car for the majority of each hour-long stint at Le Mans, with the final lap before pitting to be run solely on electric power.

“We knew the electric component of the Nissan ZEOD RC was certainly going to turn heads at Le Mans but our combined zero emission on demand electric/petrol power plant is quite a stunning piece of engineering.

“Nissan will become the first major manufacturer to use a three-cylinder engine in major international motorsport.

“We’re aiming to maintain our position as industry leaders in focussing on downsizing. Lessons learned from the development of the engine will be seen in Nissan road cars of the future.”

Cox says that the petrol engine’s development program has focussed on reducing friction and has seen French oil giant Total working closely alongside the manufacturer.

The Zeod follows Nissan’s involvement in the DeltaWing project, which ran as the Garage 56 car at Le Mans in 2012 with a 1.6 litre Nissan engine.

Now fitted with a 1.9 litre Elan engine, the DeltaWing continues to race in the United States’ United SportsCar Series.

Nissan, which has firmly rejected the claims, is buiding towards a full LMP1 program in 2015.

For more on the Zeod, watch Speedcafe.com’s video from October’s car launch