Red Bull Racing has led a flurry of new car reveals as the first test of the Formula 1 season gets underway at Jerez, Spain.

Red Bull, Mercedes, Force India, Williams and Caterham are all scheduled to take the covers off their new contenders before hitting the track.

The much-anticipated Adrian Newey-designed Red Bull joins the bulk of the field in sporting a narrow, elongated nose tip as a solution to the new regulations.

The RB10’s nose has been somewhat disguised, however, by the use of black paint for the extremity.

In the Red Bull season preview video below, Newey slated the look of the 2014 generation cars, which have been dictated by new safety-led maximum nose tip regulations.

“They are ugly and ungainly. Not many owners of these noses could really love them,” he said. 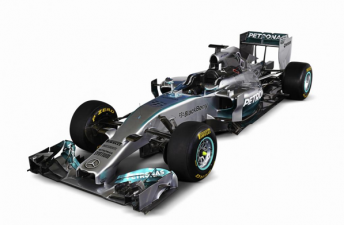 The Mercedes more closely resembles the sloped front-end of the Ferrari launched on Saturday.

The Brackley-basd team is expected to be the first on track this morning as Lewis Hamilton takes the wheel.

Nine of the 11 teams are set to test their new cars today, with the Marussia debuting later in the week and the Lotus joining the field at the second pre-season hit-out in Bahrain.