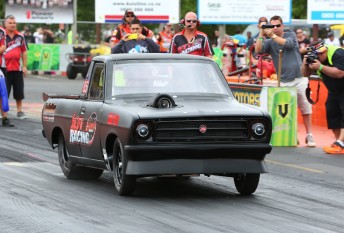 Brisbane female racer, Kelly Corbett has established a new benchmark for New Zealand drag racing over the weekend, firing down the Fram Autolite Raceway in 7.14 seconds, eclipsing the previous best time by three-tenths of a second.

Corbett’s Jett Racing team was invited to the New Zealand Four Cylinder Nationals as a feature line-up for the event just outside Auckland.

Whilst excited with setting a new record, the 29-year-old believed she could have gone faster due to shutting off at the back end of the quarter mile (400m) track. In her second qualifier she was under the old mark with a 7.34 second run. Her opening heat was a solo pass, where she experienced severe tyre shake.

Coming into round two, she eased past Robby Ward with another 7.34 second trajectory.

The event was halted just prior to the semi-finals when rain descended on the racetrack.

“To become the quickest four cylinder racer in New Zealand is absolutely amazing, (it) just puts the cherry on the cake,” said Corbett.

“When we accepted the invitation to come over, Collin (Willshire, Jett Racing team owner) and I really had one major goal and that was to beat the existing New Zealand four cylinder record.

“To not only achieve that but to do it on the very first run and with an early shut off to boot left us ecstatic to say the least.”