Crack driver Chris Atkinson will make his debut for the Hyundai Shell World Rally Team at Rally of Mexico in March.

After being forced to wait, the German-based factory team confirmed Atkinson and his co-driver Stephane Prevot will drive the #8 i20 beside team full-timers Thierry Neuville and Nicolas Gilsoul.

Hyundai are using the #8 to rotate drivers Juho Hanninen, Dani Sordo and Atkinson through the 13-round World Rally Championship.

The timing of a third i20 to be added to the line-up is expected to come mid-season however team boss Michel Nandan would not be specific when pressed about its arrival recently by Speedcafe.com 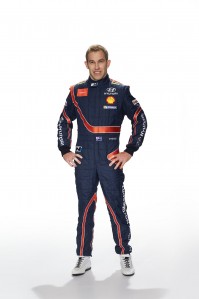 Atkinson, who is re-igniting his WRC career with Hyundai after a few seasons of uncertainty after finishing a full-time stint with the Subaru World Rally Team which spanned from 2005-2008.

The 34-year-old has been heavily involved in Hyundai’s rushed development program since the middle of last year and has won the Mexico slot based on his previous record in the demanding event.

Atkinson is proven on the extremely difficult and rough gravel stages at altitude in Mexico which is highlighted with a second place there in 2008.

“It has been a great pleasure to have been involved in the testing of the Hyundai i20 WRC but to have the opportunity to contest Rally Mexico with the team is fantastic,” Atkinson said.

“I have had several good results in Mexico, including my best WRC finish of second place in 2008, so I have some great memories of this event and the Mexican fans.

“It will be the competitive debut of the Hyundai i20 WRC on gravel so it will be interesting to see how we can perform. I know how hard everyone has been working to prepare for this season so I hope we can repay them with a good result.”

Atkinson attended the season-opening Monte Carlo Rally recently which proved an horrendous debut with Neuville crashing on the opening stage.

Sordo was then unable to fire his i20 which suffered an apparent electrical problem ahead of stage five after setting some competitive times.

Nandan confirmed that Atkinson was always the #1 pick for the Mexico event based on his experience and technical skill on the stages around the Sierra de Lobos and Sierra de Guanajuato mountains surrounding Leon.

“After Rallye Monte-Carlo we had to start making decisions on Rally Mexico and we thought Chris would be the ideal choice for our first rally on loose surface,” Nandan said.

“We were impressed with Chris’ pace in Mexico last year and having feedback from a different driver will definitely help us significantly to further develop the Hyundai i20 WRC.”

“Chris was also a major asset during our testing year in the development of the Hyundai i20 WRC in the build-up to our participation in the FIA World Rally Championship and he certainly deserves to be part of the team this year as well.”

Hyundai will test in either Spain or Portugal ahead of Rally Mexico from March 6-9.