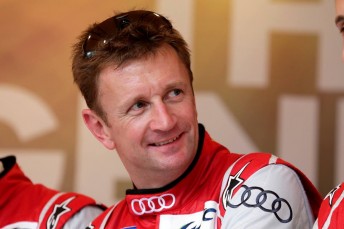 Retired Audi sportscar ace Allan McNish is keen to have a closer look at the Bathurst 12 Hour in future years.

McNish, who announced his retirement from a highly successful career last month, told Speedcafe.com that the Bathurst GT race, which has furnished growing international interest, is on his radar.

The triple Le Mans 24 Hour winner retains his role as an ambassador for Audi and has fielded some interesting offers since making his retirement from the World Endurance Championship known.

One includes team management and he has not ruled out special one-off drives if the right opportunity arises.

“Audi is obviously involved in it and I’ve watched their programs and secondly David Brabham (McNish’s long-time rival from Formula 3 to sportscars) has been on my case about it.

“In the 1980s it (the Bathurst 1000) was on the grandstand program on the BBC so I was massively interested in watching the race on TV and Mount Panorama and everything else around it.

“So from that point of view its always been a place I’ve had a lot of interest in.

“And it’s track that is a little bit like the old Nurburgring and a bit like Le Mans – it has stood the test of time.”

McNish has raced at Albert Park when he was a Toyota F1 driver in 2002-2003 and won the ‘Race of a Thousand Years’ sportscar marathon in Adelaide in 2000 after spending the lead-up days in hospital after being diagnosed with a bulging disc in his back.

He spent three days lying on his hotel floor and missed everything save for the five laps he did in practice until the start of the race.

“The situation was that I had to do 25 laps to win the championship so once I got in the car it was okay but getting out was a bit of a nightmare with the pain,” he said.

“I’ve raced in Australia a few times but I’ve never been to see that (Bathurst).

“Everybody says that whatever you raced on it is fantastic.

“I’d like to see it at some point because of those memories from being a kid, never mind everything that has been spoken about it.”

Next Story Erebus returns to AGTC with GT3 Cup champ