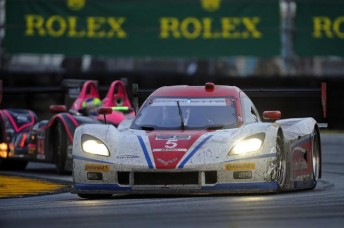 Action Express Racing have won the Daytona 24 Hours after holding off Wayne Taylor Motorsport in a dramatic shootout in the dying minutes of the twice round the clock classic.

However, a full course caution with just 21 minutes remaining ensured a dramatic final 10 minute battle with Taylor’s Max Angelelli for the victory.

In the end, Barbosa just held off Angellini to take the outright win in the 52nd running of the event for his co-drivers Sebastien Bourdais and Christian Fittipaldi by 1.4 seconds.

The result, which came after 695 laps of the famed circuit, denied an historic victory for Wayne Taylor, who had returned to the cockpit for the first time in three years to co-drive with his sons Ricky and Jordan.

The top LMP2 entry was the Nissan ORECA of Alex Brundle, Klaus Graf and Lucas Luhr in fifth.

It was a horrible day for Daytona benchmarks Ganassi Racing, which saw neither of its cars make the finish after mechanical problems.

Factory Porsche trio Nick Tandy, Richard Lietz and Patrick Pillet narrowly took out GTLM over the Andy Priaulx, Bill Auberlen, Maxime Martin and Joey Hand BMW, which was on a charge in the closing stages.

The GTD class provided the most exciting finish of all, with Alessandro Pier Guidi’s efforts to keep his Level 5 Ferrari ahead of Markus Winkelhock’s Flying Lizard Audi on the final lap initially earning the former a time penalty.

Level 5 were subsequently re-instated as the class winners; the charge of ‘avoidable contact’ having not held up to further video scrutiny.

There were mixed fortunes for the Australian and New Zealand drivers taking part in the race.

The squad claimed eighth spot in the competitive GTD class despite a trip into the barriers for co-driver Leh Keen that brought out the final yellow.

“I did a lot of laps in the race, it was pretty cool,” van Gisbergen said post-race.

“We made it to the finish, but the car was getting worse and worse towards the end and then the brakes went on Leh with just 20 minutes to go.

“(But) I really enjoyed myself. The stint I did in the middle of the night was my favourite. I think I did two-and-a-half or three hours.

“It was quiet, the crew was tired so there was not a lot of chatter on the radio and it was great. I’ve never been in a race car for that long. It was one of the best times I have had racing.”

Brendon Hartley’s Starworks Motorsport entry was among the early race retirements which also featured the works Corvette GTLM of Ryan Briscoe (engine failure) and the HPD LMP2 of David Brabham.

The race was marred by a horrific accident just three hours in which brought out the red flags for first time since 2004.

The race was stopped for 90 minutes while emergency crews extricated the drivers from both cars.

Both Gidley and Malcuelli were taken to Halifax Health hospital where it was confirmed they were awake and communicating with staff.

IMSA officials released a statement early Sunday morning saying that Gidley had surgery on his left arm and left leg overnight and has an “unstable fracture in his back” which will require additional surgery before he can be released.