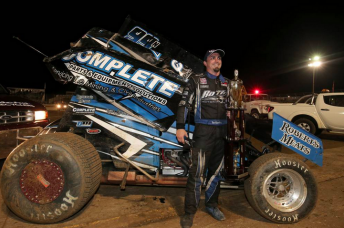 Tim Kaeding after his wild celebrations at Warrnambool. Pic: The Standard.

But it’s what happened next which proved unforgettable in what will go down as one of the wildest celebrations in Australian motorsport history.

The American World of Outlaws star celebrated with a series of high speed donuts, which ended only after he flipped and wrecked his car to the delight of the massive crowd.

He emerged triumphant, jumping on top of his upside down, smouldering machine along the front straight.

“But l didn’t expect to wreck that hard.

“Put it this way, l was going down the front straight still trying to find my bearings after the donuts down the back straight.”

“l blame Millsy (Premier Speedway’s General Manager David Mills) for encouraging me, l celebrated that a little too much.”

Kaeding’s vigorous celebrations capped off a spectacular 42nd edition of the Classic – the first to be contested over three nights.

Such was the popularity of the event, organisers had to take the unprecedented step of locking the gates at 5.30pm – more than an hour before the final night’s racing began.

Warrnambool’s Jamie Veal started from pole beside Kaeding in the prestigious $30,000 to win 40 lap final.

Veal got the jump and led the opening 6 laps, before Kaeding made the decisive move of the race, and from there was never headed on a race track that was unfortunately at its worst all weekend for the final.

The race was halted 31 laps in after a vicious rollover involving Knoxville Nationals legend Donny Schatz.

He’d spent several laps locked in a brilliant duel with Daryn Pittman and Robbie Farr, before Schatz rode the right rear of Farr and was pitched upside down into the turn one concrete wall, destroying his Luch Monte-owned machine.

A visibly shaken Schatz hobbled from the wreck and said he was sore, but otherwise uninjured.

On resumption Kaeding continued to set a hot pace to take the victory and top off a stunning week for the likeable American – who finished second at Avalon on Wednesday, second at Mount Gambier on Thursday, before his Sunday night Classic success.

“It’s one of the most amazing weeks I’ve ever had,” Kaeding claimed.

“I hate to ruin Australia Day, but America’s got the gold tonight.”

Two Warrnambool racers – one a veteran, the other a rising star – completed a popular podium, with Max Dumesny second ahead of Jamie Veal.

A record field of Americans now return to the States for the opening to the Outlaws campaign, while the Aussie contingent heads to Tasmania for next week’s Australian title.

With a three-day crowd just under 30,000, a record car count, and a popular US victor, the Classic again stamped itself across the weekend as the ultimate prize in Australian sprintcar racing.