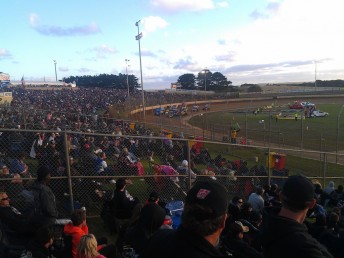 Warrnambool’s Jamie Veal took the greatest win of his fledgling career in a major upset on Night 2 of his hometown event, the Grand Annual Sprintcar Classic.

In front of his parents, family and friends, Veal emerged from the cockpit and leapt on to of his main wing in triumph, an act he’d dreamt of since he started coming to Premier Speedway as a young boy.

Having started from position 4 for the 30 lap feature, Veal snared the lead on lap 4 from Matt Egel, and was never headed.

Dual Outlaws champion Jason Meyers hunted him at a number of restarts, but each time the 25 year old was able to effortlessly pull clear.

Try as he might, Meyers just couldn’t catch Veal, and afterwards had nothing but praise for the victor.

“Jamie’s a great guy, hats off to him,” Meyers said.

“He was flying, and really good on top.”

Veal took the $10,000 to win night 2 feature from Meyers and another hometown favourite Max Dumesny, in a popular podium for the capacity crowd of 10,000.

It proved a stunning night for local racers, with fellow Warrnambool driver Darren Mollenoyux setting quick time to start the evening, ahead of American Paul McMahan and Dumesny.

Perhaps the biggest loser of the night was former winner Shane Stewart.

He had a nightmare time trial – 51st of the 56 runners – and then retired from the B-main whilst running last. He admitted it has been one of the lowest points of his career.

After his success of the opening night, James McFadden heads into the final night of the Classic as the top point scorer, ahead of Luke Dillon, Tim Kaeding and Max Dumesny.

With enormous crowds, a record field, a huge American contingent, and two popular Aussie victories from the opening two nights of racing, the stage is set for a brilliant finale

A final round of heats remain, before the countdown to the 40 lap, $30,000 to win Grand Annual. Another Classic awaits.

Previous Story McFadden the Man on Classic Night One