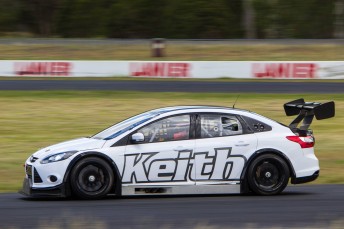 Former Australian Touring Car Champions Russell Ingall and Glenn Seton, who tested with the team earlier this month, are said to remain possibilities to steer the third entry.

Whether the third car runs at all, however, will be determined this week as the team continues to chase funding.

The two lead cars have picked up major backing from Wilson Security, which has supported Pither at various stages of his career.

“We’ve had numerous drivers we’ve talked to but the date clash with the New Zealand V8 SuperTourer round hasn’t helped,” McLeod told Speedcafe.com of filling the third car.

“We’re still in talks with numerous people but whether it runs will depend on funding.

“It’s been great having Russell and Glenn supporting the program and they’re keen to drive the car, but it has to be funded.”

The team will complete a final pre-Bathurst test at Queensland Raceway this Wednesday.

McLeod is hoping that a solid run in the race will leave his Invitational Class entries competing with the Class B GT3 machinery.

“It’s the first race for our cars so you’ve got to look firstly at finishing,” he said when asked of expectations.

“I think that if you look at what we’ve achieved there over the years in the Astra, we’d like to be tackling as many of the Class B cars as we can.

“Our goal will to be consistently quick and tick all the boxes of speed, good strategy and no mistakes.”

A field of 18 Class A GT3 cars headline the 50-strong entry list for the event, which will take place on February 7-9.

Following the event the attention-grabbing Focus sedans will head to Europe, where they’ll compete in a selection of endurance races throughout the year.