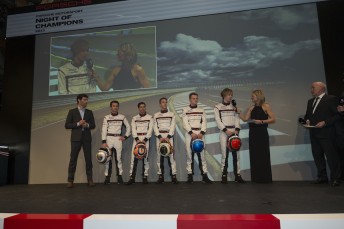 Mark Webber will link with Timo Bernhard and Kiwi Brendon Hartley as Porsche finalises its driver combinations for the 919 hybrid assault on the World Endurance Championship including the Le Mans 24 Hour this year.

The second 919 LMP1 will be piloted by Romain Dumas, Neel Jani and Marc Lieb.

Porsche continued exhaustive development of its machines recently in Bahrain with Webber, Bernhard and Dumas taking charge of one of the 919s in the evaluations.

It is believed that Porsche is about to begin crucial reliability testing of its charge as the Zuffenhausen maker returns to the LMP1 fold for the first time since 1998.

The driver line-ups have caused some surprise with Porsche deciding to split long-time partners Dumas and Bernhard.