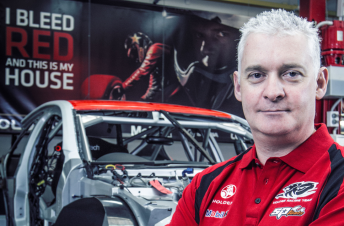 Adrian Burgess will lead the HRT’s new structure this year

Adrian Burgess believes that the Holden Racing Team has the ingredients needed to return to the top of the V8 Supercars Championship following its latest recruitment drive.

The Melbourne-based outfit is this year being managed by Burgess, who was poached from Triple Eight, and technical director Mathew Nilsson, who returns to the team from Ford Performance Racing.

The HRT has now further bolstered its roster with the addition of former Nissan Motorsport chief designer Alex Somerset.

The highly experienced Briton played a key role in the birth of Nissan’s Altima V8 Supercar having joined the team in February, 2012.

He was also the race engineer on James Moffat’s car last year, helping the second-generation racer to Nissan’s only win of the season.

In addition to design duties, Somerset will work with existing Walkinshaw staffer Ty Anderson on Nick Percat’s entry as the Holden team retains its two engineers per car format seen in 2013.

Terry Kerr has been brought across from Tony D’Alberto Racing to join Bryce Seales on Tim Slade’s car, while James Courtney continues to work with Robbie Starr and Alistair McVean.

The eight engineers will operate directly under Nilsson, while former engineering manager Tony Dowe turns his focus to heading up the team’s manufacturing and production department. 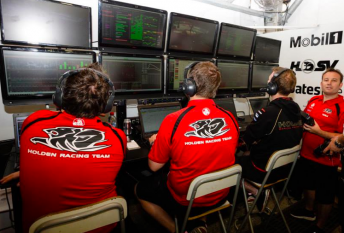 “I’m very happy with the group we’ve put together in terms of both the engineers and the drivers,” Burgess told Speedcafe.com.

“That’s the first part of the job and now we’ve got to make sure we get the output from them and make the most of their skill sets.

“We’ve got all of the experience that we need in the same room and now its about fine tuning procedures and managing the processes.

“That’s not going to happen overnight,” he added.

“We’d like to go to Adelaide and win both races but you’ve got to be realistic.

“The big team (Triple Eight) we’re up against is a very fine tuned and oiled machine and, as they showed last year, one person leaving them isn’t going to change any of the results.

“They’re designed and built in such a way that they can cope with losing members of staff because they have a depth of experience in there that is unrivalled.

“The experience that we’ve brought into here should bring us closer to that, but we’ve got to deliver the goods.”

Engine performance has been circled as a key area for improvement, with Queensland-based Roger Higgins continuing his work for the team.

Walkinshaw’s engine department is this year without customer work following the demise of Tony D’Alberto Racing and defection of Garry Rogers Motorsport to Volvo.

“That program is coming more in house, still utilising the services of Roger Higgins,” said Burgess of the engine department.

“He is a great operator and made some significant improvements for Walkinshaw Racing last year, partly because I think the development had stagnated somewhat in the last three or four years.

“There’s still a lot of work to do in that area. Like anything we’ve got priorities on where we think we need to improve and that (engines) is an area that Roger will definitely bring a significant contribution to us.”

Chassis-wise, the team has elected against rolling out any new cars for the start of the season.

Percat will in turn inherit the chassis bought back from D’Alberto’s team (WR 018), while Slade takes over the previously Russell Ingall driven machine (WR 016).

“Losing a car at Phillip Island (in James Courtney’s accident with Alexandre Premat) put us back a little bit, but having Tony’s return to us has worked well,” noted Burgess.

The team expects to have two spare chassis ready within the first weeks of the new season.