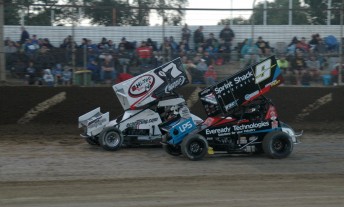 Robbie Farr (#7 – outside, with Daryn Pittman) won the President’s Cup at Avalon

Robbie Farr has got the biggest week in Australian Sprintcar racing underway in top form by defeating a quality field to take out the President’s Cup at Geelong’s Avalon Raceway.

The Eastcoast Pipelines #7 took out the event in a field heavily laden with superstar American drivers and the best from Australia. Perth-based Farr was joined on the podium by two of the US drivers in Tim Kaeding and Kyle Hirst.

Farr was emphatic in taking the win and $10,000 prize cheque ahead of tonight’s King’s Challenge at Mount Gambier and the weekend’s Warrnambool Classic.

“This is really the time of the year you want everything performing with these big races and top drivers around,” Farr said. “There was a quality field and you don’t get too many chances with these guys. We were lucky with everything going our way and I just hope it continues now for the next couple of weeks.” 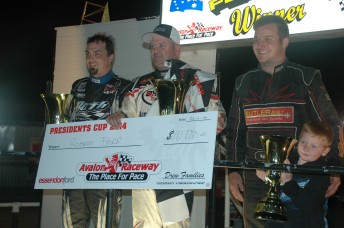 Brooke Tatnell in the Krikke Motorsport Toyota Genuine Parts Cool put in a spirited drive after winning the B-Main. The multiple Australian Champion came from the back to finish the A-Main in a solid 10th placing.

In a lap one crash at the beginning of the 25-lap main event, World of Outlaws STP Sprintcar Series Champion, Daryn Pittman was wiped out along with his fellow American, Paul McMahan and Dubbo racer, Jeremy Cross. The fourth party involved in the melee – WA-based Queenslander Cameron Gessner – was able to continue on.

A number of heavy hitters had to do it the tough way through the non-qualifier races including the likes of former Grand Annual Sprintcar Classic Champion, Shane Stewart, multiple WoO Champ, Jason Meyers, Ian Madsen, perennial Australian visitor Danny Smith and sometime NASCAR racer, Dale Blaney among others.

Tonight, the action will continue at Mount Gambier’s Borderline Raceway with the King’s Challenge – which has attracted a record field of 72 cars, including 14 Americans, before heading to Sungold Stadium Warrnambool for the Lucas Oils Grand Annual Sprintcar Classic on Friday.

For the first time in history, The Classic will be held over three nights – Friday, Saturday and Sunday. It has attracted a record 118 entries, which exceeds even the entries attracted for last year’s Knoxville Nationals, including WoO Champion, Pittman and Knoxville Champion, Donny Schatz – who makes his return after several years away from Australia’s biggest sprintcar event.

VIDEO: Speedcafe TV spoke with the drivers at Avalon