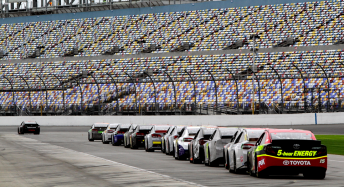 NASCAR has made sweeping changes to its qualifying format for 2014 that will see drivers on the track at the same time.

It is seen as a welcome departure from the previous system of having each driver run two single car qualifying laps.

The Sprint Cup, Nationwide and Camping World Truck Series will all introduce three rounds of qualifying at tracks measuring 1.25 miles or longer.

The new rules, however, will not apply to the season-opening Daytona 500, which will retain its traditional system.

Part one of the new-look qualifying elimination round will be over 25 minutes and includes all cars and trucks.

The 24 fastest will then advance to the second round with the ones that miss out set in their first round qualifying times in descending order.

The 12 fastest from the 10-minute second round in qualifying will advance to the third round with the 13th to the 24th positions set based on their times in descending order.

Qualifying will culminate in the third round with the fastest set in a five-minute run that will fix the top 12 starting positions.

NASCAR will order a five-minute gap between qualifying rounds.

At tracks shorter than 1.25 miles, qualifying will be over two rounds. The first will run for 3o minutes and set the grid for 13th backwards, while a final 10 minute hit-out following for the top dozen drivers.

“We believe the timing is right for a new qualifying format across our three national series,” said Robin Pemberton, vice president for competition and racing development.

“This style of group qualifying has all the makings of being highly competitive and more engaging to our fans in the stands and those watching on television and online.”