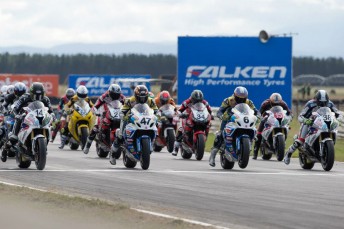 The Australian Superbike Championship has confirmed that three of its six rounds will take place alongside the V8 Supercars Championship in 2014.

The Superbikes ran with the V8 Supercars twice last season, with the second outing a non-championship event at Phillip Island in November that drew a field of just seven 1000cc entries.

Motorcycling Australia has stepped up its involvement in the championship this year, taking over administration tasks from ongoing promoter IEG.

The technical regulations have also been tweaked with a single Superbike class incorporating aspects of the former Prostock category.

The championship will move to a Pirelli control tyre as it aims to reduce costs to competitors.

In a statement last week reassuring riders that MA has taken over the previously contentious payment of prizemonies, CEO David White described 2014 as “make or break for IEG and MA”.

The changes have come after a failed attempt to merge the ASBK with the rival Australasian Superbike Championship Series (ASC).

See below for the 2014 Australian Superbike Championship calendar