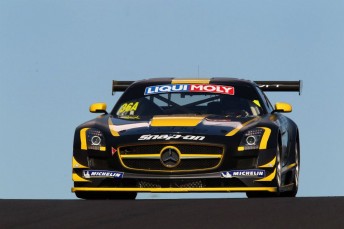 Erebus is looking to defend its 2013 Bathurst 12 Hour victory

Veteran businessman-racer Greg Crick is a surprise inclusion in Erebus Motorsport’s six-man Bathurst 12 Hour line-up, which will again be split into all-Australian and all-German teams this year.

Crick will join countrymen Will Davison and Jack Le Brocq in the squad’s #63 Mercedes SLS due to the need to fit around the race’s driver seeding regulations.

Despite his extensive Bathurst experience, the 59-year-old has been classified as an unseeded driver by race organisers.

Erebus has selected German Nico Bastian as its other unseeded pilot, with the 23-year-old set to join former Erebus V8 Supercar driver Maro Engel and the previously confirmed Bernd Schneider in car #1.

The unseeded driver requirement has ensured that current Erebus V8 driver Lee Holdsworth will miss out on a berth in the race.

Having spent recent years switching between an aging Dodge Viper in Australian GT and a Chrysler Charger in the Touring Car Masters, Crick describes the Erebus call-up as an “honour”.

“For me, at this stage of my career to be handed the keys of arguably the best car in GT competition, I was blown away, and extremely honoured,” he said. “I drove another modern GT car recently and couldn’t believe how good it was, the aero grip especially.

“I’ve been studying the footage of the SLS and can see where it has the advantage, and it’s a significant advantage, it really is the best in the business.

“I love Bathurst, but I’ve always gone along as the privateer underdog, with equipment not quite up to the task…

“Now here I am, in the closing stages of my career with the best car in the field, so I’m not about to miss the opportunity to keep the car in one piece for Will and Jack to go after the win.”

Unlike Crick and Davison, fellow Erebus debutant Bastian has experience of the SLS GT3, with his current AMG Customer Sports duties including a third place finish in last year’s Nurburgring 24 Hours.

The former German Mini Challenge champion also boasts a season of GT racing aboard a BMW Z4 to his credit and is expecting Erebus to contend strongly for a second consecutive Bathurst win.

“I think the driver line-up of both cars is very strong and competitive, so we can say, that the mission is not a ‘mission impossible’,” he said.

“For me it is a dream come true. It´s my first time in Australia and on Mount Panorama – I can’t wait, I´m really looking forward to it!”

The race will meanwhile mark a continuation of Engel’s relationship with Erebus despite being dumped from the squad’s full-time V8 Supercars line-up this season to make way for Davison.

Engel attended last year’s 12 Hour as a spectator just days after being confirmed for the V8 Supercars season.

He has driven in Erebus’ GT program on two occasions; dominating November’s Macau GT event for the team before retiring with a puncture.

“It was nice to get back in the SLS and be immediately competitive,” said Engel of the Macau drive, having originally been recruited by Erebus from AMG’s SLS Customer Sports driver roster.

“To set a new record pole time, and break the lap record was a great result, and we showed that we were more than capable of winning the race despite it being just our first visit to Macau.

“Can we win the 12-Hour again? For sure… The team have the experience, they have the best car and we have some outstanding drivers, so it’s going to make things easier, but Bathurst is Bathurst and it’s 12-Hours of attack, so we will see what comes.”

Two of last year’s winning drivers, Thomas Jaeger and Alexander Roloff, have both been left out of Erebus’ line-up this year, although the former is expected to return to Bathurst with German team HTP Motorsport.

An official list of all entered cars and drivers is expected to be released by organisers on Monday ahead of the February 7-9 event.