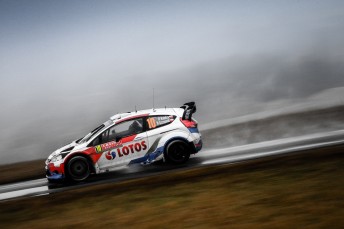 Robert Kubica let a dream result to his maiden outright WRC career slip when he left the road in dramatic fashion on the second day of the Monte Carlo rally.

Kubica, driving the RK M-Sport World Rally Team Ford Fiesta, tripped up on the 49.03km Vitrolles-Faye stage after at one stage leading the rally before ending the opening six stages in third after struggling with some incorrect tyre choices.

The ex-F1 driver under-steered off the slippery road in an innocuous but nonetheless dramatic exit with the Fiesta momentarily spitting flames from under its bonnet as it came to rest.

“There was a sudden change of grip,” Kubica said after the crash on stage nine.

“We knew we had to be cautious because we had it marked in our pace notes from the ice note crew, but unfortunately I misjudged how big the change would be.

Just before [the incident] the grip was really good, but there was also a lot of mud on the stage.

“We went into the corner, the front went straight, we hit a bridge and unfortunately that was the end of our rally.”

Team principal Malcolm Wilson maintained that Kubica had done a superb job until the accident with Monte Carlo upholding its reputation of treating rally drivers with disdain.

“I can understand how Robert [Kubica] feels tonight,” Wilson said.

“Having spoken with him, he is hugely disappointed and feels as though he has let the team down, but that is certainly not the case.

“We are absolutely delighted with his performance and the entire team is now 100 percent behind him.”