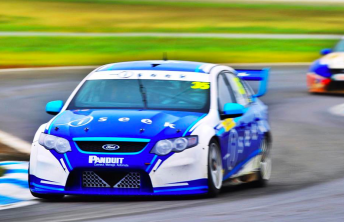 George Miedecke will step out of the MSR Falcon this season

One of the leading Dunlop Series teams, Matt Stone Racing, is on the hunt for a new driver following the sudden exit of George Miedecke.

The son of former touring car stalwart Andrew Miedecke has informed MSR that he will not continue with the team after proving unable to raise the required budget.

A former V8 Ute and US Late Model racer, Miedecke had hoped to contend for the title in 2014 before eventually stepping up to the main series.

“It’s unfortunate that I’ve had to leave Matt in the lurch but it’s just financially unattainable,” Miedecke told Speedcafe.com of continuing his V8 Supercars career.

“It’s tough because there are some exceptions and success stories like Scotty (McLaughlin) and Chaz (Mostert), but everyone else that’s coming in is having to just spend, spend, spend.

“A few years ago there was a healthy contribution to the teams (in the V8 Supercars Championship) to get on the track which made it a lot more financially viable.

“Now obviously rookies are being asked to bring huge amounts of money to secure seats and while I have the support of my dad and everything it’s just not realistic for a guy like me to do that.”

Miedecke says he’s now looking at a sideways step into the Carrera Cup, or a move back into V8 Utes.

He will be one of several drivers attending this week’s pre-season Carrera Cup test to discuss options with teams.

Stone, meanwhile, is working hard to find a replacement driver to fill his team.

“When we announced that Ash was continuing it was pretty public knowledge that we had a full house,” Stone told Speedcafe.com.

“We’re jumping back into the market a bit later than usual and just letting people know that we have a seat available.”

Although, like its main series brother, the Dunlop Series is facing the prospect of losing entries this year due to the difficulty of raising budgets, Stone says his operation is in good shape.

“They are very expensive to run and it’s hard to get the sponsorship to cover the entire cost of running,” he said of the cars.

“I think that’s the biggest flaw in the category, but from V8 Supercars’ perspective they do what they can.

“For us, we’re expending this year with a Touring Car Masters entry, so we’re nowhere near in the position of folding.”

Gomersall fits his racing around running data and network services specialist firm iSeek, which was the major backer of Miedecke’s entry in 2013.