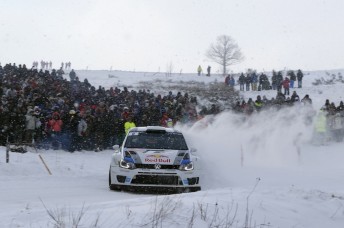 WRC champion Sebastien Ogier is expecting fierce competition from rivals when he begins his title defence at the Monte Carlo rally.

The Frenchman stormed to his maiden world title with Volkswagen last year ending the 10-year reign of Sebastien Loeb and Citroen.

Despite his domination of 2013, the 30-year-old says he will come under significant pressure to successfully defend his crown.

The 2014 season kicks off with the time-honoured Monte Carlo Rally which begins next week.

The rally, which works its way from the iconic principality up into the French Alps over 18 stages, is the most prestigious on the calendar.

Ogier is adamant he will face stiff competition this season and has already earmarked a threat from new manufacturer Hyundai, the team Aussie Chris Atkinson will drive selected events for in 2014.

Mikko Hirvonen’s return to M-Sport after two years at Citroen is also likely to be one of his strongest challengers along with Hyundai’s #1 pick Thierry Neuville.

“Our main goal is obviously to defend the title”, said Ogier.

“It is never easy to win a title, but successfully defending it is even more difficult. I am certain that the other teams will put us under pressure.

“However, I am confident about the new season on the back of such a successful 2013.

“A new manufacturer is joining the series in 2014, in the form of Hyundai, and this will make the competition even fiercer.”

Ogier is however confident that the changes made to his Polo R WRC in the off season will further improve the car that took him to nine victories last season.

The 16 times world rally winner also has the added incentive to perform at this year’s Monte Carlo Rally with the event beginning in his town of Gap.

“We have made small improvements to the Polo R WRC. For example, it is now even more reliable.

“I am also pleased that the ‘Monte’ will start from my home town of Gap this year. That is an extra incentive for me to be the fastest come the end of the rally.”