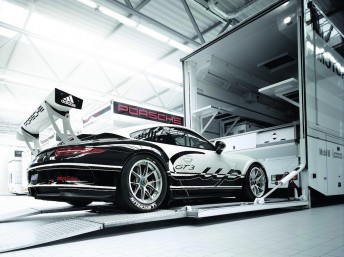 A field of 25 fresh Porsche 911 GT3 Cup cars have arrived in Australia ahead of next week’s hand-over test event in Sydney.

The all-new Type 991 machines built at Porsche’s renowned motorsport facility at Weissach in Germany produce 460bhp and feature an optimised chassis and longer wheelbase which has grown 100mm over its predecessor.

The new cars will be involved in a four-day hand-over event at Sydney Motorsport Park which will serve as a training ground for team engineers to become familiarised with the 911 GT3 Cup machines.

Drivers will also have the opportunity to become accustomed to the Type 991 examples with a day-and-half of on-track testing.

British ace Ben Barker, who had a season driving the cars last year in the Porsche Mobil 1 Supercar season, will offer guidance at the hand-over event.

“All 25 cars have now landed in Australia, which is obviously exciting for the championship,” Porsche Cars Australia motorsport manager Cam McConville said.

“Porsche currently has deposits for the majority of the cars.

“We are indeed ahead of where we thought we’d be at this time in terms of car sales and now only have less than a handful of cars still available.

“Next week’s Sydney Motorsport Park event will be important for teams to learn the technical and maintenance side of the cars.

“And for the drivers to adapt to the new cars, which take technology to a new level such as an aluminium composite chassis and a pneumatic paddle shift gearbox.”

The Porsche Carrera Cup Australia season will kick off as the primary support to the V8 Supercars at the Clipsal 500 in Adelaide from February 27 to March 2.