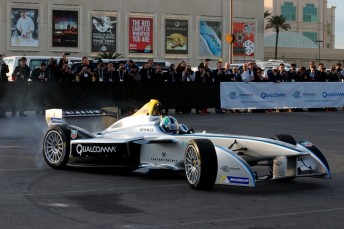 As part of the technology, Michelin plans to incorporate an electronic tag within the tyre with the Radio Frequency Identification Device chip to enable competitors to identify each tyre individually.

“These RFID chips will be embedded in the tyres’ sidewalls to ensure their traceability, from their production right through to their return to the factory after use at the racetrack,” Michelin Motorsport manager Serge Grisin said.

The RFID chips will make it possible to collect data relating to running conditions, including temperature and pressure sensors.

It will be possible to record and access information covering the tyre’s entire lifecycle.

The Formula E car has been designed and built by French-based Spark Racing Technology together with a consortium of some of the most respected organisations in motor racing including Dallara (chassis), Williams (battery design), McLaren (powertrain & electronics), Renault (overall system integration) and Michelin (tyres).

Development of the tyre continues ahead of Formula E’s first race in Beijing on September 13.