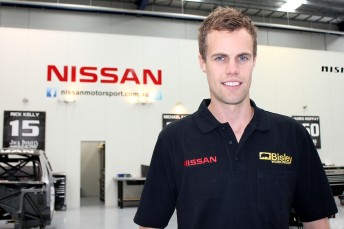 The championship-winning engineer Scott Sinclair has moved to Nissan Motorsport as part of sweeping management changes to the Melbourne operation.

Sinclair has taken up the post with the Braeside team as general manager of Racing Operations which will see him oversee on-track competition activities of the four-car squad.

He moves to the Braeside-based Altima stable after leaving Walkinshaw Racing which has, itself, undergone key managerial changes for 2014 headed by the hiring of Adrian Burgess and the departure of team manager Steve Hallam.

The Nissan team’s owner/driver Todd Kelly has welcomed Sinclair to the team, noting his appointment is part of the increasing development of young engineering talent taking on greater levels of team management responsibility.

“We are all confident Scott will lift the bar for us in all aspects of our team’s racing and competition function.

“Scott will work closely with Craig’s (Spencer) engineering group and at the same time provide fresh young leadership for our car crews.”

Sinclair is looking forward to grasping the challenge of leading Nissan into its second season of V8 Supercars.

“I’m looking forward to the challenge of my new role at Nissan Motorsport,” Sinclair said.

“I feel that Nissan is an emerging force in the sport and I’m excited about being part of the next phase of its success.

“Todd and Rick Kelly have put together a very strong team and the facility at Braeside is state of the art. I really can’t wait to get into the new role.”