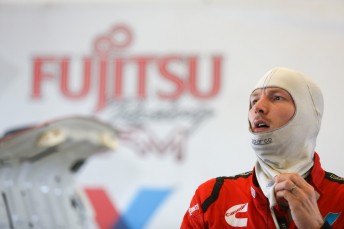 Alex Premat has confirmed that he will not be driving for Garry Rogers Motorsport this season.

The Frenchman, who has driven for GRM for past two seasons, has notified the team that he will be exploring other opportunities to continue his motor racing career this season.

GRM will make the transition to become the Volvo Polestar Racing outfit this season where they have confirmed that they will retain young Scott McLaughlin however there has been no decision on the identity of the driver for the second S60.

Former DTM driver Premat, who finished 19th in the 2013 V8 Supercars Championship standings, had been contracted to the team until the end of 2014.

Premat persistently clung to hope that he would remain, believing he had more than justified his position to stay with the team.

A statement from Premat published on the Garry Rogers Motorsport Facebook page read: “After examining my driving options both here and overseas and having had discussions with Garry I have decided to explore other avenues and I have informed Garry that I will not be driving for GRM in season 2014.”

The identity of the second driver to partner the already confirmed Scott McLaughlin at Volvo Polestar Racing GRM remains unclear.

Commercial arrangements for the Volvo operation are also yet to be disclosed.