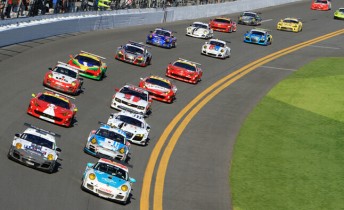 Shane Van Gisbergen is a surprise inclusion on the entry list for the traditional ‘Roar Before the 24’ curtain raiser for the prestigious Rolex Daytona 24 Hours.

The 24-year-old Kiwi has been listed as the fourth driver for Alex Job Racing in the #22 Porsche 911 GT America.

He is expected to drive alongside American’s Cooper MacNeil, Leh Keen and Canadian LP Dumoulin.

When contacted by Speedcafe.com, Van Gisbergen was unable to confirm he will be making his debut at famous Daytona endurance event, however he has since declared on his twitter account that he is testing this weekend.

The Roar Before the 24 test, taking place from January 3-5, is the first official meeting of the newly formed United Sportscar Championship.

The championship, owned by the France family, was formed as a result of a merger between the American Le Mans Series (ALMS) and the GRAND-AM Series.

The first free practice season at the Daytona International Speedway has been completed with van Gisbergen’s Porsche squad third fastest in the GTD class with a 1.48.676s.

The Action Express Racing Corvette Daytona Prototype of Joao Barbosa and Christian Fittipaldi was quickest overall with a time of 1.38.630s.

David Brabham was the top Australian as his Extreme Speed Motorsports HPD prototype was sixth fastest.

The Corvette was 13th quickest overall in the opening free practice session.

Sydney-born Indycar star, Ryan Briscoe, driving for the works Corvette Racing squad, was second in the GTLM class, while Stanaway was sixth in the same category.