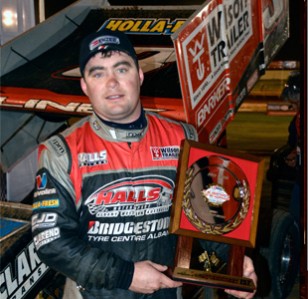 South Australian Steven Lines dominated the fourth round of the ENZED World Series Sprintcars with a commanding win at Geelong’s Avalon Raceway.

The Mt Gambier-born racer produced a faultless drive in the 35-lap A Main to take the chequered flag for the second time this season by an impressive 4.192s from Robbie Farr and James McFadden.

Farr’s second place finish and use of the ‘joker card‘ has moved him to the top of the championship standings just 41 points ahead of Lines, who suffered a retirement from his home round on Saturday.

“The car kept getting better and better,” said Lines.

“We really didn’t have to change a thing, even during the red light stoppage.

“There wasn’t much I couldn’t do with it. This really makes up for our disappointment in Mt. Gambier two nights ago.

“I can’t thank Brian Hall and everyone associated with this team enough.”

The race was marred by the only red light stoppage when Mitch Foster spun the car in front of the rapid Kyle Hirst in an incident that saw Hirst roll over and collect Garry Brazier, Grant Anderson and David Murcott.

Eight-times Brooke Tatnell looked to be a podium proposition around mid-race but couldn’t quite crack the defences of front row starter Brad Keller.

In the end, the race belonged to Lines, who stayed out of trouble while setting a blistering pace around the Avalon Raceway.

Farr just managed to hold off a hard charging McFadden while Keller took fourth just ahead of Tatnell.

Luke Dillon, who held the points lead going into the meeting, finished eighth while Shane Stewart and Stephen Bell completed the top 10.

The World Series Sprintcars continues on New Year’s Day with a visit to Premier Speedway at Warrnambool.