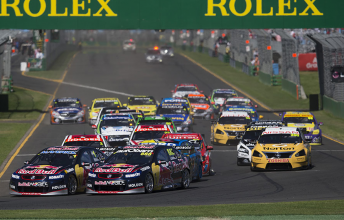 The V8 Supercars at Albert Park earlier this year

Although it is yet to be confirmed how many events Ten will broadcast, the deal ensures that V8 Supercars and Formula 1 are on the same network for the first time since 2006.

With V8 Supercars having been granted its own pitlane at Albert Park three years ago, there now appears to be no major hurdles in the way of making the meeting count for championship points.

Responding to Speedcafe.com’s enquiries this week, V8 Supercars CEO James Warburton was cautious on predicting a change for 2015, but confirmed that discussions on the matter will take place.

“It is too early to tell, but we will work through this with the AGP Corporation and our media partners,” he said.

AGP Corporation chief executive Andrew Westacott has underlined the event’s enthusiasm for such a move.

‘We’re very keen on the idea and we’ll explore it for 2015 and beyond,” he told Fairfax Media.

‘It’s definitely on the radar.”

A number of gimmicky race formats have been used by the V8 Supercars at Albert Park in recent years in order to increase interest in the races.

The category has yet to confirm its schedule for the 2014 event, although it is expected that the four-race, soft tyre only format seen this year will return.

Ten’s contract to broadcast Formula 1 concludes at the end of the 2015 season, while the Australian Grand Prix’s place on the Formula 1 calendar is also yet to be cemented beyond the 2015 race.