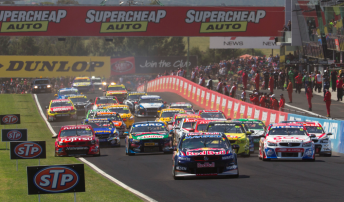 As the final pieces of the 2014 V8 Supercars Championship grid puzzle fall into place, the category’s top teams are working hard to lock down their line-ups for the Pirtek Enduro Cup.

Red Bull Racing Australia landed a major blow to its opposition in the week following the season-ending Sydney 500 by announcing that it had poached Steven Richards from Ford Performance Racing.

Between full-time and co-driving duties, Richards had been with the factory Ford squad for seven years, winning this year’s Bathurst 1000 alongside Mark Winterbottom.

Luff, who won the inagural Enduro Cup alongside Lowndes despite struggling at certain stages, is understood to be in talks with Walkinshaw Racing about joining its endurance line-up for 2014.

The factory Holden squad endured an unsual build-up to this year’s enduros, which included farming out Nick Percat to customer squad Tony D’Alberto Racing before recalling him just a month out from Sandown.

Greg Murphy is expected to return alongside James Courtney, while Luff and Tekno Autosports owner Jonathon Webb, who will step down from full-time driving next year, are being linked to the seats alongside Percat and Garth Tander respectively.

Having driven with Russell Ingall in 2013, Ryan Briscoe is in the mix to return in the now Tim Slade driven Supercheap entry thanks to the lack of calendar clashes with his IndyCar and United Sportscar commitments.

That seat, however, could be reserved for Tony D’Alberto, pending the now former Walkinshaw customer’s efforts to secure a full-time drive with Tekno or Brad Jones Racing.

Walkinshaw Racing’s engineering and development manager, Tony Dowe, confirmed that co-driver discussions are taking place, but said that there is no rush to conclude deals.

“The reality is that Nick has moved across to run in the main game so we’ve got to look for two guys there,” he told Speedcafe.com.

“We’re pretty happy that we can have Murph again, but beyond that we’re talking. There are some really good guys out there.

“I don’t think we’ve got much of a different view on life to what we had this year,” he added of whether the team is eager to lock down its drivers early this time around.

“We just want to make sure we get the right guys to drive for us.”

Aside from Richards, the other standout co-driver from this year’s inagural Enduro Cup, Jack Perkins, is also off the market courtnesy of his return to full-time driving with Charlie Schwerkolt’s Jeld-Wen Ford.

FPR already has Steve Owen on its books for a second year, while team stalwart Dean Canto is again expected to return alongside David Reynolds.

The factory Ford team is one of several known to have been in contact with Steven Johnson, who impressed with Erebus Motorsport in this year’s Cup and appears an ideal co-driver for the relatively inexperienced Chaz Mostert.

Erebus will need just two co-drivers thanks to its revised structure. Craig Baird’s seat alongside Lee Holdsworth is thought to be secure for a third season, while FPR refugee Alex Davison is being tipped as a possible partner for his brother Will in the second entry.

Changes are also expected at Nissan Motorsport, with the factory team working on calling in at least one of its internationals.

German Michael Krumm and Spaniard Lucas Ordonez both tested the team’s Altima’s at Winton in August, reportedly impressing in the process.

Polestar’s stable of Swedish Volvo drivers could further bolster foreign involvement in next year’s endurance races, although the identity of its second full-time driver is yet to be made clear, leaving co-driver discussions premature.

Confirmation of those final full-time seats, which will rule the likes of D’Alberto, Russell Ingall, Dale Wood and Tim Blanchard in or out of the co-driver market, should help solidify several key endurance pairings in January.