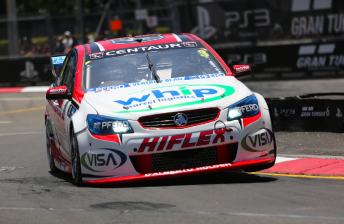 Tony D’Alberto at the season-ending Sydney 500

Tony D’Alberto Racing is working hard to ensure that its entry returns to the V8 Supercars grid in a rejuvenated form next season.

The team has confirmed that it will no longer run as a single-car operation from its own Melbourne workshop.

TDR was one of three that did not enter its Racing Entitlements Contract before the December 1 deadline, but is currently chasing sponsorship to sew up a return.

Two clear options have emerged for the team, which is expected to finalise the sale of its current Walkinshaw Racing Holden and equipment back to the factory squad in the new year.

Taking its REC to Tekno Autosports, which is down to a single entry following the Paul Morris REC it was leasing being sold to Dick Johnson Racing, is said to be its preferred scenario.

Bringing a commercial package to Brad Jones Racing for Tony D’Alberto to replace the DJR-bound David Wall in the Albury-based team’s third car is also a possibility.

The latter move is thought to be a lower cost option, but would see TDR forced to relinquish the REC that it has owned since the end of 2009.

“We’re working feverishly behind the scenes to try and secure funding for next year,” TDR owner Al D’Alberto told Speedcafe.com.

“We’re talking to a couple of what could be seen as naming rights people, but we haven’t got an answer from them yet. We’re hopeful that in the new year we can land one of them.

“The plan is to not necessarily be in the same guise as we were last year. We’re not intending to be a one car team.

“There are a couple of options there but one in particular that we are trying to focus on.”

D’Alberto confirmed that keeping his own REC on the grid, which would occur with Tekno, is the desire.

“Our preference is to plug our REC in with another team which has previously run two cars,” he said.

“That’s our aim. They’ve certainly got the runs on the board and we feel that, based on our performance this year, we showed that we could actually mix it with even our supplier (Walkinshaw Racing).”

Tony D’Alberto enjoyed his career best season result of 16th in the championship standings this year having also achieved personal highs of second in qualifying (at Winton) and fourth in races (at Winton and the Gold Coast).

Although proud of his team’s achievements, Al D’Alberto said that moving away from operating its own squad is an exciting, not disappointing , development for TDR.

“We realised that for us to go forward we need a different structure,” he said.

“To have two cars identical with what I’d consider two of the best drivers in the category (Shane van Gisbergen and Tony D’Alberto) working with each other to go forward…. I don’t see it as a backwards step at all.

“If I can only get half the budget and can only do half the job, that’s not a position I want to be in.”

D’Alberto added that he’ll be working through the Christmas break in his attempts to lock down the commercial package.

If TDR can find the funding to team up with Tekno, the third BJR seat will likely be fought out between ex-DJR driver Tim Blanchard and this year’s Dunlop Series winner, Dale Wood.

Both drivers boast strong resumes and funding to operate the #21 Holden, which runs alongside BJR’s Jason Bright and Fabian Coulthard driven entries.