Staff changes at Walkinshaw amid restructure

Staff changes at Walkinshaw amid restructure 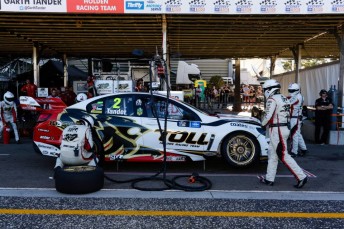 Four senior members of Walkinshaw Racing have left the factory Holden team amid a restructure ahead of the 2014 season.

Walkinshaw Racing’s management will change next year with the widely publicised hirings of Adrian Burgess, who replaces Steve Hallam as managing director, and Mathew Nilsson, who steps in as technical director.

Amid the influx, the squad’s chief designer Doug Skinner, race engineers Matt Crawford and Scott Sinclair, as well as operations manager Adam Laws, have all moved on prior to the Christmas break.

Sinclair, who had been engineering Garth Tander’s entry, is understood to have left voluntarily, while the others were informed of their fate last week.

Walkinshaw’s engineering and development manager, Tony Dowe, declined to comment when approached by Speedcafe.com about the changes on Thursday.

Ex-Formula 1 engineer Skinner had been with the team since 2005 and oversaw its Car of the Future program, while Laws joined from Britek in 2008.

Walkinshaw Racing will expand from three to four cars next year with the addition of James Rosenberg’s Racing Entitlements Contract.

Nick Percat will drive the extra entry, while Tim Slade moves into the Supercheap Auto Holden to replace Ingall.

During his recent visit to the Sydney 500, team owner Ryan Walkinshaw hinted that more engineering firepower will be announced in the new year, but would not elaborate on details.

He did, however, confirm that the layout of the team’s Clayton headquarters is being fettled in order to create a better working environment for the engineering staff.

“We’re moving certain aspects of our facility around which has opened up a huge area of office space that we see as perfect,” he told Speedcafe.com.

“All the engineering, designing and marketing can now be done under one roof, which is where they should be.

“Hopefully we can (eventually) bring the sub-assembly down from the north end of the facility as well.

“It’s perfect timing that it’s all happening now with the new managers coming on board. It means that we can have that all ready for them in terms of an efficient working environment.

“That’s something that we lacked previously, particularly when we had Craig Wilson in charge. It was a bit all over the place.”

Tander was the highest finished Walkinshaw driver in the 2013 V8 Supercars Championship standings in eighth, while James Courtney, who missed the final round due to injury, was 11th and Ingall 15th.

The team has not taken the championship since Mark Skaife won the last of his three consecutive titles for the team in 2002.