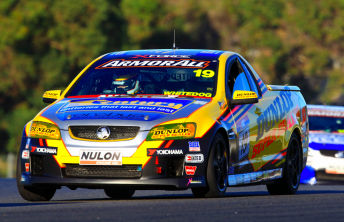 Erebus’ Ute was run externally in 2013

Erebus Motorsport will expand its V8 Ute Racing Series commitments next season, running two entries out of its own workshop.

Erebus purchased the former James Brock-owned Ute license heading into 2013, where it was campaigned by Stephen White under lease.

The new two-car operation will be based out of Erebus’ Moorabbin, Melbourne, workshop and will be headed by Erebus general manager, Barry Ryan.

The crew will consist of the Erebus GT team and some members of existing Ute team South Coast Racing.

No decision has been made on drivers of the two Utes, however Ryan confirmed that Erebus was in negotiations with White to continue.

“We’ve used this year to further assess the V8 Utes and get a better feel for how the Series operates,” said Barry Ryan.

“We have had a great association with Stephen White and Whitedog Racing this year and the negotiations between us are continuing for Stephen to possibly step into the Erebus V8 Ute.

“Ultimately, we’re looking to establish a properly structured operation to deliver the best competitive outcomes for our sponsor partners and the other stakeholders involved, whether that is with two or even three Utes working within that framework.”

Erebus CEO Ryan Maddison told Speedcafe.com earlier this month that the Betty Klimenko-owned team is taking a long-term view of the Utes category.

The series is continuing to work on a future platform that will allow the class to continue with other manufacturers once the current Ford and Holden models go out of production.

“We like what the category is talking about with its direction as far as a race chassis at some point in time in the future and becoming more contemporary with the pickups or utes in the general marketplace,” explained Maddison.

“With Volkswagen coming out with a pickup here (Amorok) and the US and Japanese brands heavily involved (in the road car market), the writing is on the wall (for the current V8 Ute Racing Series regulations).

“I think it’s really good that the Ute category have seen that and are moving towards it well in advance.”

Erebus supported the Auto One V8 Ute Series’ Rookie of the Year program in 2013.

Elliot Barbour won the award, scoring himself a test in either an Erebus E63 AMG V8 Supercar or one of the team’s SLS AMG GT3s.