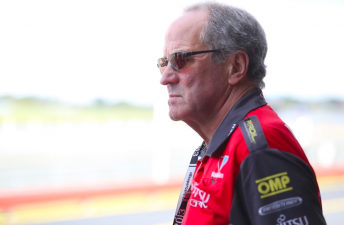 Secrecy surrounds the test plan for Volvo Polestar Racing’s first S60 V8 Supercar as the team continues to prepare for the 2014 season.

An image of the car leaked out to media during the historic day, instantly softening the impact of Volvo’s planned January launch.

It is understood that the S60 subsequently enjoyed its first proper track hit-out at Winton yesterday (Tuesday), where it was tested back-to-back with the Holden Commodore that the team fielded for Scott McLaughlin this season.

Team owner Garry Rogers confirmed to Speedcafe.com that his team was at Winton, although insisted that it had only run the Holden.

“We’re not testing, we’re just bedding some brakes on the Commodore,” he said. 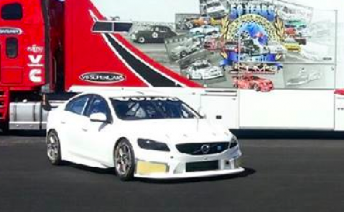 “The same pads will fit the Volvo of course, so we’re making sure everything is in order for when the first engines arrive in a couple of weeks.

“We’ve got as far as we can with the Volvo for now (after the test last week),” he continued.

“Polestar assures us that the engines are going along ok, so we’re happy to wait.

“Until we’ve got the engines and get going we’re really just killing time.”

With initial running having taken place with one of the team’s existing Holden engines, the timing of the arrival of the Volvo powerplants is also clouded.

Although Rogers has publicly stated that the target is a mid-to-late January arrival, sources indicate that the first test with a Volvo engine aboard could happen as early as this Monday.

Meanwhile, the typically eccentric Rogers spoke enthusiastically of personally getting behind the wheel of the Holden during the Tuesday hit-out.

“I was a bit slow but never mind, I’ll improve with miles,” he laughed.

“I drove our (2000 Bathurst 1000 winning Holden Commodore) VT at Bathurst in the demonstration last year but hadn’t properly been behind the wheel in about 10 years.

“I don’t know why I did it really but it was just a bit of fun. I refuse to grow up I guess!”

Rogers has been celebrating his 50th year in motorsport throughout 2013 having transitioned from driver to full-time team owner in the early 1990s.