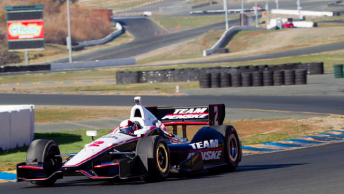 Juan Montoya has completed his maiden test runs for Team Penske ahead of his return to IndyCar in 2014.

After running at Sebring and Phoenix recently Montoya turned laps of the Sonoma road course in northern California, a track he won his first NASCAR road course race in 2007.

Montoya ran the #2 Penske Chevrolet on the slightly longer configuration to the NASCAR layout.

“It’s hard to go to the places where I’ve been in a stock car because my mind is not right,” Montoya said.

“My mind says one thing and my foot says another. They don’t agree. You go wide open through the Esses and my mind is saying, ‘you can do it’ and my foot is saying ‘no, I’m coming out.’

“I just need a little more confidence in the car and seeing what the car can do. You really (have) got to try to build it up.”

The ex-Chip Ganassi CART star and F1 driver completed 50 laps as he continues his steady build up to a return to American open wheel racing.

The Colombian will join Penske incumbents Will Power and Helio Castroneves at the champion squad’s next test at Sebring in January.

Montoya is determined to make a success of his return after such a long absence in single-seaters.

“I want to win races. It’s a shorter season, the cars are faster, we do street courses, road courses, small ovals, big ovals.

“There’s not a lot of runoff here so it’s easy to get it wrong. I’m trying to build to it. The transition is going to be tremendous.”

Meanwhile in other developments for 2014, Takuma Sato, who won the Long Beach Grand Prix in April, has been confirmed to return to the #14 ABC Supply car run by AJ Foyt.