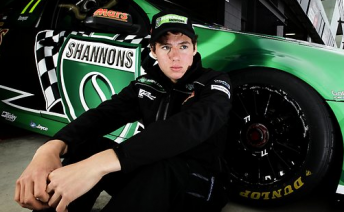 Cameron Waters has the 2014 Dunlop Series title in his sights after confirmation that he’ll return to the class in a Ford Performance Racing Falcon.

While the Minda operation will be no longer next year, Waters has secured a graduation into Ford’s factory squad.

FPR last ran in the Dunlop Series in 2012 with Chaz Mostert, who finished third in the final standings behind Scott McLaughlin and Scott Pye.

“I’m thrilled to be joining Ford Performance Racing for next year’s Dunlop Series and my goal is to win the team’s first DVS title,” said Waters.

“FPR has great people and the equipment to do the job and I want to use 2014 as a springboard to launch my career to the next level, just as Chaz Mostert has recently done.

“My preparation has already started and the opening event of next year just can’t come quickly enough.”

Waters will drive the ex-Mostert chassis that has sat idle throughout 2013, aside from use in the FPR-presented Shannons Supercar Showdown reality television show.

Waters won the Showdown in its inaugural year, 2011, while it was being run by Kelly Racing.

FPR team principal Tim Edwards added that he hopes to see Waters, who won the Australian Formula Ford Championship in 2011, continue to follow in the footsteps of 2010 AFFC winner Mostert.

“The Dunlop Series is the ideal breeding ground for future V8 Supercars star drivers, engineers and mechanics so we are glad we are back,” Edwards said.

“Cam has come through the ranks, been successful in Formula Ford and has started to make progress in his short time in the Dunlop Series so he is the right driver to have in our car.

“The fact he is also a Shannons Supercar Showdown winner is a nice link given our relationship with the show this year.

“We’ve seen what Chaz’s exploits have led to so we are keen to see Cam set off on the same path and collectively we all want to win the title so we look forward to working together in 2014 to make that happen.”