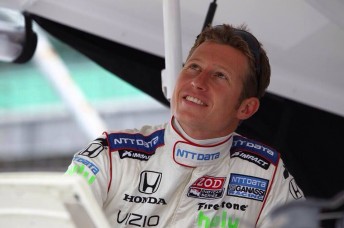 Chip Ganassi Racing has confirmed that Australian Ryan Briscoe will drive its #8 NTT DATA Dallara-Chevrolet full-time in the 2014 IndyCar Series.

The news coincides with the announcement that Tony Kannan, who was originally slated to race the #8, will step into the #10 Target entry previously campaigned by Dario Franchitti.

The deal marks a return to full-time driving for Briscoe, who spread his 2013 between a part-time IndyCar program with Panther Racing, sportscar outings with Level 5 and V8 Supercars appearances with Walkinshaw Racing.

His year also included a one-off start in the Ganassi #8 at the Indianapolis 500, where he finished 12th.

Briscoe’s endurance racing efforts will continue under his new Ganassi deal, with Chevrolet announcing that the Australian will make a number of appearances in its Corvettes next season, beginning with the Rolex 24 at Daytona.

“This is just great news and I can’t wait to get back behind the wheel of the No. 8 car again,” said Briscoe.

“We built some great chemistry during the month of May this year with the whole crew.

“I think all four drivers can win races next season and it’s not every day you get to be a part of a team like that.

“For me personally it’s been an amazing last few days – this announcement coupled with the birth of our first child just a few days back. I couldn’t be happier right now.”

It will be a landmark season for the team, switching from Honda to Chevrolet engines.

“Honestly, it is always refreshing when you have partners that get the big picture and both Target and NTT DATA both understand that,” added team owner Chip Ganassi of the new Briscoe and Kanaan deals.

“This is the best of both worlds. We not only get the driver that we wanted to add to our team in Ryan Briscoe but in addition we are able to put them in the cars that I felt were the most appropriate.

“The news couldn’t really be better for all of our teams.”

Briscoe’s IndyCar career began with a single season at Ganassi in 2005 and boasts 111 starts, seven wins and a best of third in the championship while driving for Penske Racing in 2007.