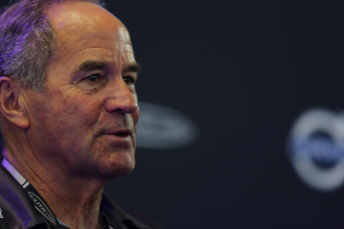 The first Volvo S60 V8 Supercar is already up and running, but team owner Garry Rogers remains on the hunt for a new naming rights sponsor.

Rogers’ backer of the last four season’s, Fujitsu, made the shock announcement four weeks ago that it would not continue under the team’s new Volvo Polestar guise.

Although securing Volvo’s support was a major coup for the team, the Swedish manufacturer has made it clear that it won’t be fully funding the two cars.

While the virgin white S60 was completing initial aero testing at East Sale on Wednesday, Rogers was interstate working on finding a sponsor.

“We’re talking to a few parties but we haven’t got anyone that has physically handed over the money yet,” he told Speedcafe.com of the search.

“What we’re looking for is no different to what we had with Fujitsu.

“It was still going to be called Fujitsu Racing GRM. Volvo Polestar Racing is simply our factory affiliation.”

Volvo managing director Matt Braid confirmed that the V8 Supercars will be presented in the colours of an external commercial partner. That will set the Australian program apart from Polestar’s other current projects, which almost solely run in the firm’s signature blue hues.

“We recognise that this series is very commercial, more so than many other series around the world,” Braid told Speedcafe.com.

“Compared to other touring car categories in Europe sponsors here occupy a significant status in driving this game.

“We will have Volvo representation on the car but no more outlandish or high priority than other factory teams would have.

“We’ve got the car (bodyshape) and the engine. You can’t take the car away from us.

“The look of the car colour wise will be ultimate dedicated to by the commercial partner.”

Braid added that Volvo Car Australia is assisting Rogers with the sponsor search.

“Garry and his crew are experts at it given that he has the contacts, but we are assisting them where we can,” he said.

“Likewise, we have had people approach us as well so between the two organisations we are thankfully being able to talk to a few people which is great.

“We are quite confident a commercial sponsor is going to be forthcoming.”

Fujitsu joined GRM for the 2010 season after the late re-signing of Toll scuttled its plans to join the Holden Racing Team.

Prior to that, Rogers’ V8 Supercar operation had enjoyed primary support from oil giant Valvoline since the team’s inception in 1996.