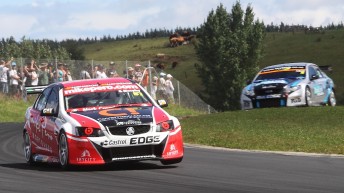 New Zealand’s two rival V8 touring car classes will run on the same card at the Grand Prix meeting at Manfeild and at the bumper V8 Supercars event at Pukekohe next year.

In what will prove a glut of touring car action for Kiwi fans, the two categories which have been the centre of an ongoing schism in New Zealand motor racing in recent years, have met common ground for the first time.

The development has come after a high level meeting between the management of both the NZ V8 Touring Cars (formerly NZV8s) and V8 SuperTourers. Jason Bargwanna, current NZV8 champion and winner of the opening round of the 2013/14 championship

“The NZV8TC invited the owner of SuperTourers to a round table meeting recently and discussed ways in getting both V8 classes racing at some of the same race meetings sometime in the future,” NZV8 Touring Cars chairman Ian Booth said.

The NZV8 Touring Cars ran with depleted numbers last season, however their entry list swelled to more than 30 for the support race at the V8 Supercar meeting at Pukekohe last April.

The category continues to run the new generation TLX Holden Commodores, Ford Falcons and Toyota Camrys while retaining the older TL cars in their fields.

Former V8 Supercar driver Jason Bargwanna won the opening round of the 2013/14 NZV8TC championship last month in a Camry.

Bargwanna and Greg Murphy are the respective reigning champions in the rival categories.

There is also hope that a Nissan could join the series next season with a version of the Altima becoming the fourth represented marque in the championship while a European badge is also a chance of being represented.

“With a new Nissan Altima and rumour of a possible European brand coming onboard the future of the NZV8 Touring Cars looks very exciting,” said Mr Booth.

While the NZV8TC year has already commenced, the third season of V8 SuperTourers will kick off at the Highlands Park track at Cromwell on the South Island from January 25-26.

Both Championships will share their first weekend as invitation classes at the New Zealand Grand Prix, the showpiece for the Toyota Racing Series at Manfeild Park from February 8-9.

The classes will then come together on ANZAC weekend on the undercard to the V8 Supercars at Pukekohe from April 25-27.