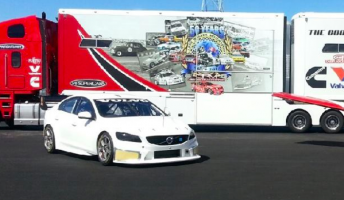 The first image of Volvo Polestar Racing’s S60 V8 Supercar has emerged ahead of the car’s debut in the 2014 championship.

As previously reported, the team was expected to undertake initial aerodynamic evaluation running as early as this week ahead of category parity testing in January.

The picture portrays the Volvo at a test in a plain white livery.

Although the first race units will not arrive until at least mid-January, Volvo unveiled a display version of its own V8 Supercar engine at last weekend’s Sydney 500.

The car was expected to undertake its initial testing with one of the team’s existing Holden engines.

The S60 sports an end-plate mounted rear wing as all five manufacturers are expected to race next season.

Team owner Garry Rogers confirmed the validity of the image to Speedcafe.com on Wednesday evening.