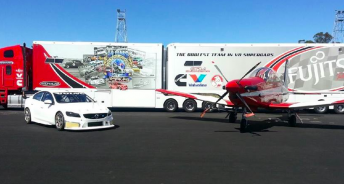 Volvo’s S60 V8 Supercar completed its maiden hit-out in an aerodynamic evaluation at the Royal Australian Air Force’s East Sale base in Gippsland, Victoria on Wednesday.

The test created a storm of interest on Wednesday afternoon when an image of the car was leaked online.

Team owner Garry Rogers did not attend the test but told Speedcafe.com that the Volvo ran smoothly during the day.

“We went through the intial aero diagnosis to see where the car is at,” Rogers told Speedcafe.com.

“According to the boys the car went ok; we didn’t do any radical changes or anything out of the ordinary. It’s a good starting point.

“This was the first time that the car had turned a wheel and it ran well mechanically, which is a credit to the guys.”

Strong winds in the area, however, are understood to have hampered the gathering of data.

None of Volvo or Polestar’s Swedish technicians were in attendance, despite the car giant’s global motorsport technical director, Martin Persson, having been in Sydney last weekend for the public launch of the B8444S engine.

As expected, the car ran with one of the team’s existing Walkinshaw Racing-sourced Holden engines at East Sale.

With the Polestar units not arriving until at least mid-January, Rogers says that his team is yet to decide whether any proper track running will be completed with the car in its interim form.

“The guys are coming back tomorrow and we’ll look at what we need to do to work out what our time schedule is,” he said.

“We won’t have the engines for a while to come yet, so we’ve just got to try and have a bit of a plan just in case.”

It is expected that Volvo Polestar Racing will be granted two Accredited Manufacturer test days in addition to the category-wide allocation of four test days for the 2014 calendar year.

The East Sale test was a private aero evaluation run, like that attempted by Nissan in November, and does not come out of any test log.

The debut of the Volvo came just three days after Garry Rogers Motorsport rolled its Holden Commodore VFs off the race track for the final time in Sydney.

Rookie Scott McLaughlin finished 10th in the standings for GRM with two race wins, while team-mate Alexandre Premat was 19th and faces an uncertain future.

Next Story Whincup to test V8 Supercar in Thailand