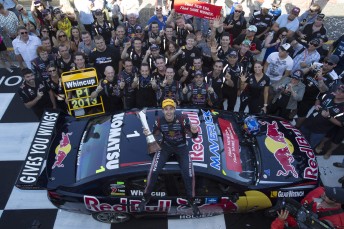 Team Acc-sell-or-ators has won a VIP trip to next year’s Clipsal 500 for winning the 2013 Castrol EDGE V8 Predictor – exclusive to Speedcafe.com.

Scoring the most points in the inaugural V8 Predictor competition sees team Acc-sell-or-ators win the amazing VIP trip which includes flights, accommodation, tickets, spending money and a hot lap of the Adelaide track in a V8 Supercar.

Acc-sell-or-ators topped the overall standings by 30 points over Kiwichik racing with Clearly No Way rounding out the top-three.

The battle amongst the Experts saw the Speedcafe.com Team win a close race with international sportscar racer Oliver Gavin by a mere five points.

Not far behind in third was the 2005 V8 Supercar Champion Russell Ingall on a total of 235 season prediction points.

The final round winner for the year was NISMO Raiders after scoring 57 points with a 50% prediction accuracy for the Sydney 500 round.

For winning the final round NISMO Raiders picks up the ‘bonus prize’ of a signed Ford Performance Racing shirt and cap tagged by Mark Winterbottom, Will Davison, Steve Richards and Steve Owen.

With over 5000 players the Castrol EDGE V8 Predictor has enjoyed a successful inaugural year and Speedcafe.com thanks everyone who has played and enjoyed this all new online V8 Supercar fantasy game.